With every technological evolution, new professions are born and some become out of date. AI art generators are the case and today I want to tell you about one of them. Let’s find out more about Midjourney and why it triggers fears among visual artists.

Midjourney is a text-to-image AI that generates pictures based on text prompts. It was presented to the public on the 12th of July 2022. There are two possibilities to use it. You can go on the Midjourney discord bot or on the web app, where you can find a gallery of your visuals. On Discord, the process goes in a public chatroom. As a starter it can be inspiring because you can see fabulous results from other users. So, to get started you need to prepare a prompt and paste it into a sentence bar with the command “/imagine”. Midjourney provides a free trial of 25 generations but believe me, you wouldn’t stop. When the limit ends there are three subscription plans: a $10, a $30, and $60 per month.

The image generation takes some time (around 40-50 sec) but you can look at how it transforms from a blurry one into a pretty nice image. Finally, you’ll get 4 images and two options: upscale (U) or make more variations (V). Once you choose to upscale your image, it will cost you another credit. With upscaling you can get an improved version of an image and then you can ask for more variations for a particular one. 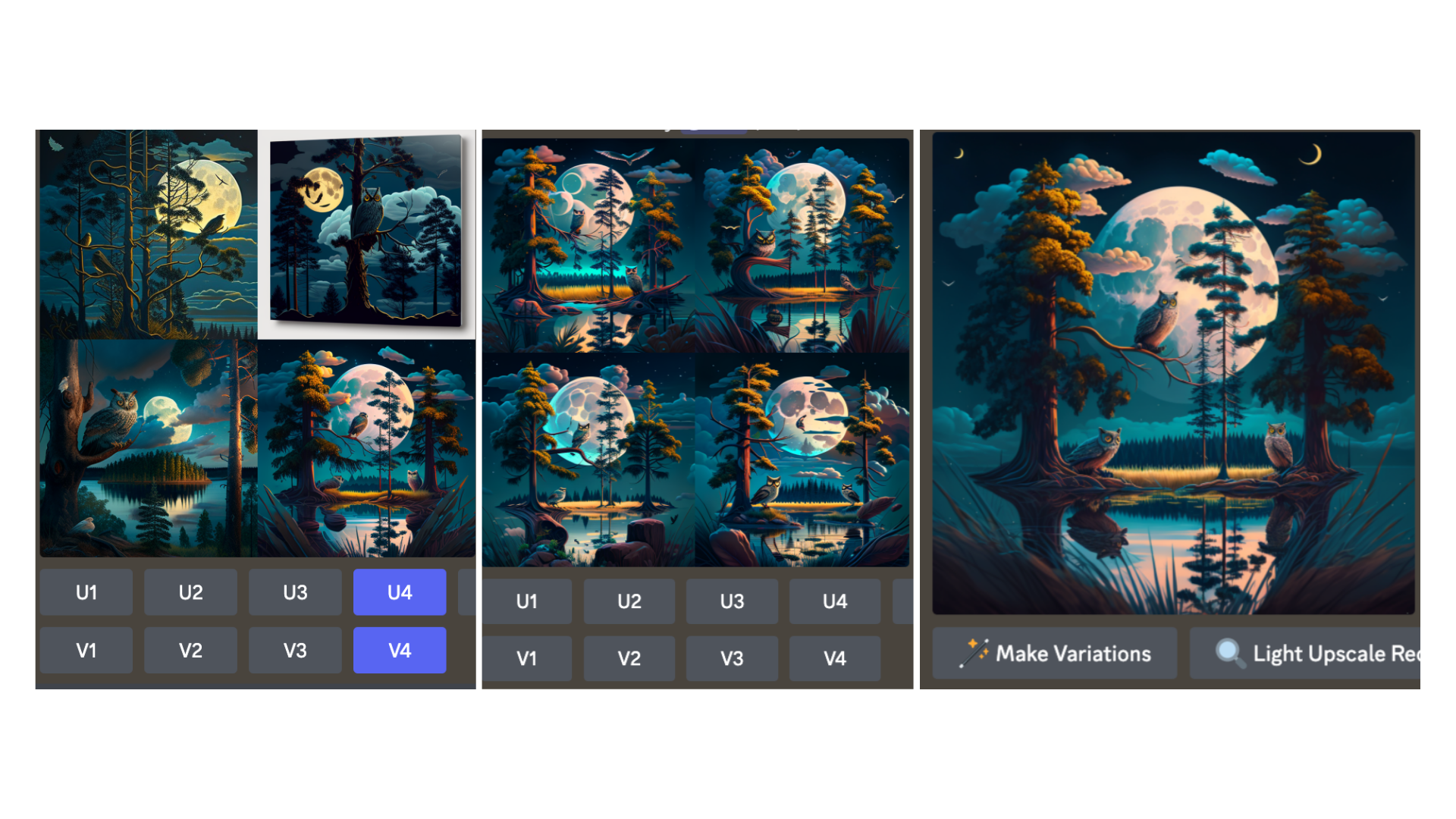 As you can see in the collage above the last picture is a result I’ve obtained. I want to emphasize how important is to give a clear and precise prompt. It’s the same as with ChatGPT. The more clear you are, the better your output will be. While surfing the Discord chat room, I saw a lot of brilliant art and some outputs were missing details that were outlined in the prompts. Below are two cases to give as an example. The first example is “a fancy blue Tesla missing” but perhaps the prompt is too detailed. Also, in the second one, there is a minion instead of Spongebob.

Some tips on how to utilize Midjourney

Developers outlined warnings and tips on how to utilize Midjourney. Let’s look into some of them:

Avoid: “Summer night. Pine forest near the lake. There is a big yellow moon surrounded by three clouds that look like fluffy cotton. There is a                 blue, fancy Tesla on top of one of the clouds. There are two owls on the pine branch.”
Try: “big moon, fluffy clouds, two owls on a pine”.

“Two dinosaurs fighting in a city”, “a picture of a Mexican man with a sombrero, highly detailed, highly realistic, HD”. 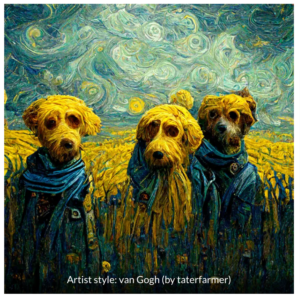 Where is this can be applicable and why artists are afraid?

Scroll the live chat in Discord and have a look at the art that appears there. There is a variety of logos, and futuristic visuals with unreal landscapes, fantastic characters and landings for websites. Imagine all the use cases for this imagages: ads for e-commerce, storytelling, gaming, etc. And, the most important is that you don’t need to be able to draw. That’s why the artist’s community is not happy as such a tool has the potential to steal their work.
Also, there is the question about IP rights. Some artists have accused Midjourney of devaluing original creative work as its dataset is trained on huge datasets and may include copyrighted artists’ works. According to the Privacy Policy, images generated with Midjourney are publicly available but the terms of service include a DMCA takedown policy, allowing artists to request their work to be removed from the set, if they believe copyright infringement to be evident.

During the last month, I’ve been exploring its capabilities and I am impressed. It’s definitely a super-powerful tool for the generation of visual content. The best way to learn is to play with it by using highly detailed guides provided by the Midjourney team. There are also other similar solutions such as Stable Diffusion or DALLe but these will be topics for the next blog posts.

Follow me on socials and stay updated with the latest technology news!

Youtube
We use cookies to ensure that we give you the best experience on our website. If you continue to use this site we will assume that you are happy with it.Ok