OpenAI's Impact on the Future of Education

With the introduction of ChatGPT, the way we consume and generate information has been forever changed. Since its release on November 30, 2022, the internet has been abuzz with numerous use cases for its implementation, as it can write anything from comments to articles.

But, what impact will this have on the education system?

If it can generate content in mere seconds, how can teachers ensure that a particular essay is the result of a student’s hard work and not simply a response generated by ChatGPT to a well-crafted prompt? Will the use of ChatGPT lead to a decrease in critical thinking, independent data analysis, and creativity, as the job is now being done by an AI-powered chatbot?
In order to fully understand the implications of ChatGPT, it is important to delve deeper into the subject. If you are unfamiliar with what ChatGPT is, please refer to my previous blog post for more information.

Should we ban it?

On January 6th, the New York City Department of Education announced restrictions on the use of ChatGPT in public schools within the city. The reason behind this decision is that “While the tool may provide quick and easy answers to questions, it does not encourage critical thinking and problem-solving skills, which are essential for academic and lifelong success.”

Also, Australian universities share the same fear about ChatGPT’s negative impact and want to return to “pen and paper” exams. However, there are educators that stand against new-brand technology and those who believe that ChatGPT could be useful. Toby Walsh, Scientia professor of artificial intelligence at the University of New South Wales, said that teachers had gathered already on such “crisis meetings” devoted to future exams and plan to deal with plagiarism. But, Walsh summarised that simply banning ChatGPT would be “a technical failure” as there is “a thing called VPN” and also other ways to cheat. “It’s an arms race that’s never going to finish, and you’re never going to win.”

This raises the question of whether other educational institutions will follow suit and implement similar restrictions on ChatGPT. Despite these restrictions, it is important to note that students may still have access to the tool through their personal cell phones and may find ways to utilize it despite the limitations set in place by schools. Technology has long been a disruptor in the education process and this is not the first instance of such an occurrence.

Adam Stevens, a New York City history teacher, expresses his belief that the restriction on ChatGPT is worthless and even counterproductive. He compares the concerns surrounding ChatGPT to those that arose with the advent of Google years ago. Instead, Mr. Stevens suggests assigning students work that requires personal input and shifting the focus away from pursuing grades and towards gaining knowledge. 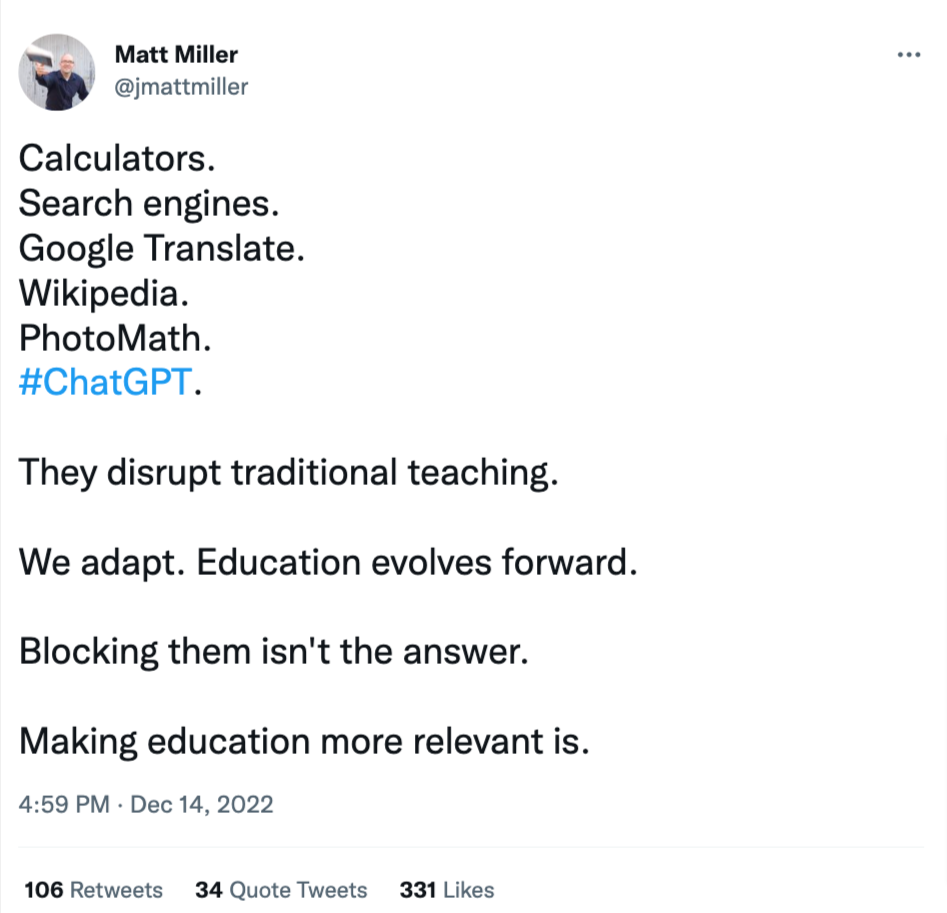 Here are some examples of how teachers can use ChatGPT:

It is crucial to note that AI-based solutions are here to stay and will only continue to evolve. I believe that the educational system must find ways to incorporate this technology, gain its advantages, and guide the youth in its responsible usage.

OpenAI’s researcher Scott Aaronson in his blog post “My AI Safety Lecture for UT Effective Altruism” told “If you turned in GPT’s essays, I think they’d get at least a B in most courses. Not that I endorse any of you doing that! But yes, we are about to enter a world where students everywhere will at least be sorely tempted to use text models to write their term papers. That’s just a tiny example of the societal issues that these things are going to raise.”

Therefore OpenAI is developing a tool to combat plagiarism in chatbot systems like ChatGPT. The watermarking tool embeds an “unnoticeable secret signal” into text generated by the system, allowing for the identification of the source of the text. This development is particularly useful for preventing academic plagiarism (such as cheat on tests, or writing any essays and assignments) and ensuring that the output of AI systems is not passed off as human-generated.

In the meanwhile, there are companies already building ai writing detection tools such as Originality.Ai.

I believe that the educational system has not been adequately prepared for the emergence of artificial intelligence, as it was with the advent of Google and the internet. However, we must not assume that learning has come to a halt. Humanity has continually found ways to overcome obstacles and adapt to new realities. As with any innovation, we will also find ways to minimize risks and mitigate the potential negative impact of AI-powered tools on the quality of education.

I for one share and support  Mr Miller’s opinion. We should pursue gaining knowledge instead of grades. We simply need to learn how to use the power of ChatGPT wisely and not feel threatened by it.

Follow me on socials and stay updated with the latest technology news!